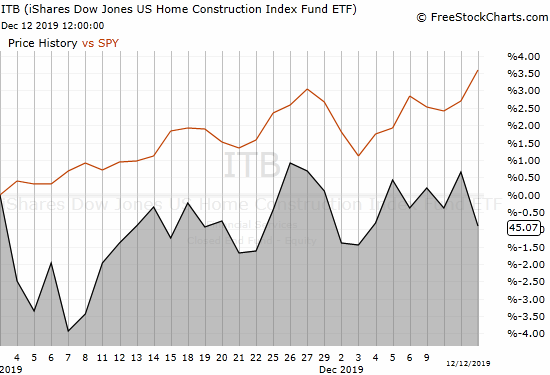 Since November, the iShares US Home Construction Index Fund ETF (ITB) has churned right under a near 2-year high, marked by a climactic top in January, 2018. Meanwhile, the S&P 500 (SPY) continues to churn higher to fresh all-time highs. Interest rates are a fresh culprit in the under-performance of ITB.

The iShares Barclays 20+ Year Treasury Bond Fund (TLT) is a tradeable proxy for interest rates. When rates go up, TLT goes down. The chart below shows TLT making a series of lower highs and lower lows since the August high. This steady creep in interest rates finally started to weigh on ITB just as it first tested the January, 2018 high. When news broke on Thursday about an imminent trade deal between the U.S. and China, the bond market placed its bets on strong economic growth by bidding up interest rates. TLT plunged 1.7%. ITB fell alongside TLT with a 1.5% drop. The S&P 500 jumped to a new all-time high on the heels of a 0.9% gain.

The one-day divergence between the S&P 500 and ITB was one of the widest of the year for the two indices. This dynamic puts me on alert as I do not expect such a divergence to last. Something has to give. Home builders are very sensitive to the economic cycle, so a generally rally in the stock market cannot long outlast weakness in housing.

I was tempted to take profits on my TLT call spread as TLT struggled at its 50-day moving average (DMA). I decided to hold as a partial hedge on bad economic news (like a collapse in trade talks). Now that a downtrend grows, I am just waiting for the opportunity to accumulate a larger TLT position on a test of the uptrending 200DMA. TLT last touched that important trendline during a 1-day test on March 1st of this year.

The home builder trade is trickier. ITB is stuck in a period of consolidation. I still see little reason to aggressively trade the builders here, and I remain on alert to take profits on my ITB call spread. Yet individual builders are revealing company-specific opportunities. A divergence among builders is suddenly widening with fewer and fewer builders holding onto strong uptrends. The dynamic looks like a breakdown in slow motion. However, I am nibbling very tentatively just in case sentiment turns to bet on continued economic strength rather than a bet on a retreat in demand. Demand retreated sharply last year when mortgage rates rose with the rate hike cycle of the Federal Reserve.

For example, today I bought January call options on KB Home (KBH) as the stock lost 2.9% to retest its uptrending 50DMA. KBH has trickled along its 50DMA since bottoming after an analyst downgrade. Last week, I bought shares in LGI Home (LGIH) on a bet that the builder’s on-going strength in orders is still sustainable. On the flip side, Meritage Homes (MTH) raised fresh alarm bells as it resumed its downtrend with a 4.2% loss on the day and a near 4-month closing low.