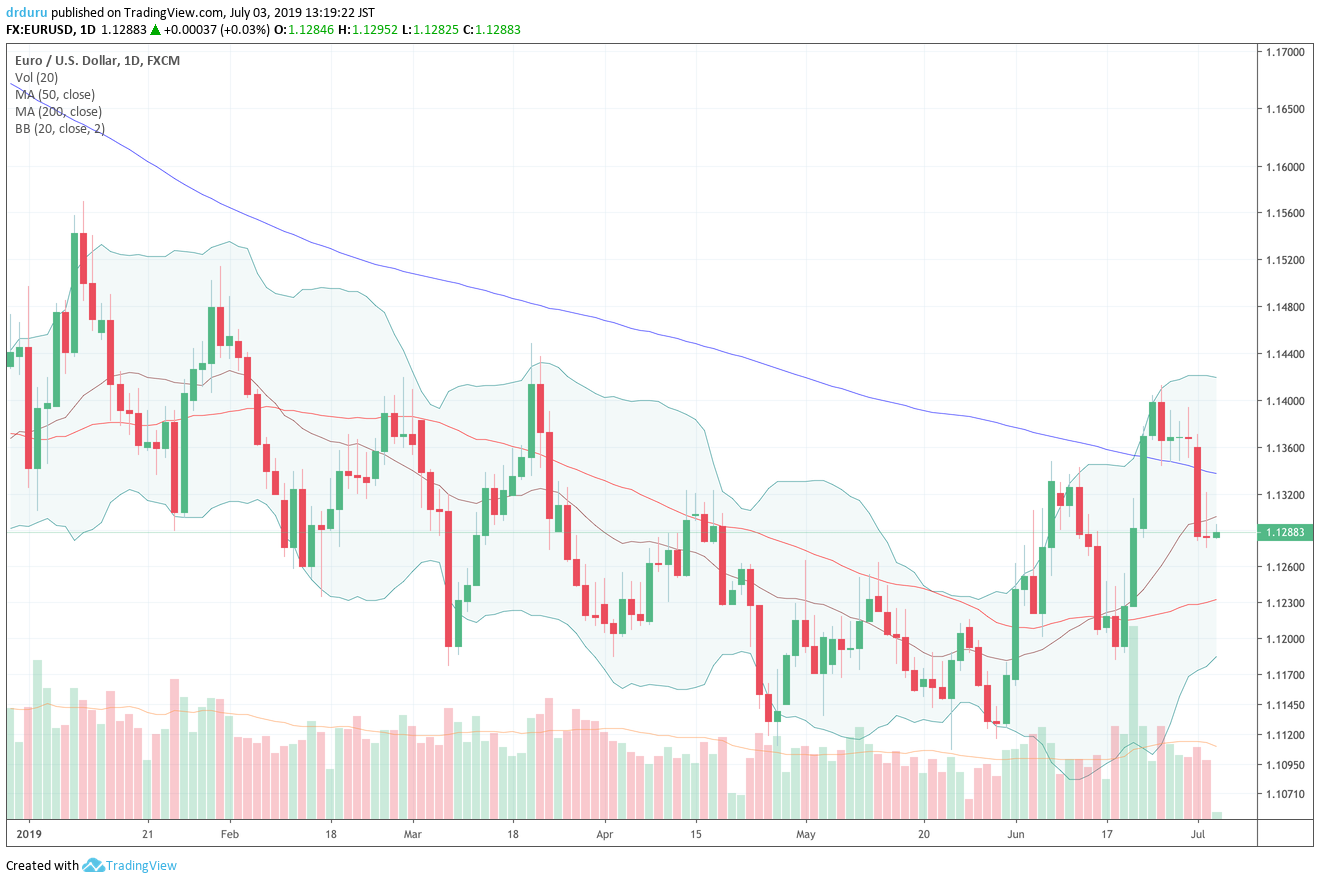 In the background of the growing euphoria in the U.S. over imminent rate cuts from the Federal Reserve is the growing weight of the steady descent of the economy in the eurozone.

The week started with the stock market’s first opportunity to respond to the declared truce in the trade war between the U.S. and the China. However the currency market had bigger matters on deck: a eurozone manufacturing PMI that was bad enough to push the German 10-year bond to a record low -0.36% (at the time of writing, the yield was slightly lower at -0.37%). The euro (FXE) against the U.S. dollar (EUR/USD) plunged right through its declining 200-day moving average (DMA).

On the flip side, the U.S. dollar index (DXY) recovered from its 200DMA breakdown.

The IHS Markit Eurozone Manufacturing PMI only fell month-over-month by 0.1 to 47.6 in June. However, this drop was the 5th straight monthly decline. The PMI also sits at 6-year lows. Employment dropped for a 2nd straight month and represents the first job-cutting streak in almost 5 years. This economic weakness is helping to drive raw material prices down for the first time in 3 years and Markit expects future pricing pressures for suppliers.

The statement on the economic outlook was the key quote from the PMI (emphasis mine):

“The downturn is also showing no signs of any imminent end. The PMI survey’s forward-looking new orders to inventory ratio in fact deteriorated in June and the future expectations index remained at one of its lowest levels seen since 2012.

Although off recent lows seen earlier in the year, the subdued forward-looking indicators add to concerns about the economy in the second half of the year. A major concern is that, the longer the manufacturing downturn persists, the greater the likelihood of the weakness spilling over to services.”

This weak and dire economic news translates into the prospects of a fresh round of monetary easing from the European Central Bank (ECB). Financial markets moved to price in a rate cut from the ECB in September.

As if this economic news were not bad enough, the sun rose in the U.S. with the news that President Trump, fresh from a truce with China, decided to renew tariff threats against Europe. Trump must be smelling blood with the eurozone economy teetering. From Business Insider:

The US Trade Representative said in a statement late Monday it would consider targeting $4 billion worth of additional products from the European Union, including cheese, pasta, coffee, whiskey and chemicals. That would be in addition to $21 billion worth of EU imports threatened with tariffs in April.

The move marks the latest move by the US to retaliate against EU aircraft subsidies.”

With this backdrop, it is perhaps of no surprise that the Reserve Bank of Australia rushed to cut its interest rate to a new record low for the second meeting in a row. In the statement, Governor Philip Lowe cited warning signs from the global economy even while describing overall conditions as “reasonable” (talk about a useless economic description!). From the statement on monetary policy:

“The outlook for the global economy remains reasonable. However, the uncertainty generated by the trade and technology disputes is affecting investment and means that the risks to the global economy are tilted to the downside…The slowdown in global trade has contributed to slower growth in Asia…

Global financial conditions remain accommodative. The persistent downside risks to the global economy combined with subdued inflation have led to expectations of easing of monetary policy by the major central banks. Long-term government bond yields have declined further and are at record lows in a number of countries, including Australia.

I duly noted how the RBA acknowledged expectations from the financial markets for easy (easier) money and delivered. This pattern is now well-established for central banks in global retreat. Interestingly, the net response from currency markets was relatively muted on the Australian dollar (FXA).

All these fireworks opened up new short-term trading opportunities in the currency market. With the U.S. dollar index bouncing out of the danger zone, I rushed to take profits on several long dollar positions as planned. The euro looks ready to rebound against the U.S. dollar, but I have zero interest in going long the euro ahead of ECB rate cuts and an on-going descent into a likely recession. Perhaps, ironically, the Australian dollar may become the best bet against the U.S. dollar given it is unlikely the RBA will cut rates further…at least not without a deepening calamity in the global economy.