Commentary
Last week, the NASDAQ snatched the baton from the S&P 500 (SPY) and now looks poised to resume its run of all-time highs.


As a result of the latest recovery, I am looking to continue trading call options on PowerShares QQQ ETF (QQQ). My efforts to try to pick the short-term winners among the big cap tech stocks last week felt like herding cats. It was telling that all my profits came from QQQ call options. Apple (AAPL) was a glaring exception to my long bias. For the first time in a long time I swung at put options. While the trade was not successful, I remain wary as AAPL continues to struggle underneath its 50-day moving average.

AAPL is the worst relative performer of the “usual suspects.” Here is a quick review:

AT40 (T2108), the percentage of stocks trading above their respective 40DMAs, ended the week on a strong note. My favorite technical indicator jumped 4 percentage points to close at 54.2%. AT40 ended the previous week at 56.7%. The volatility index, the VIX, dropped to 10.0 and sits right at the edge of a new 14-year low.

On May 16th, I noted my change of heart on TWLO thanks to the CEO’s purchase of shares. My call option form that trade became deep in the money and more than doubled. At that point, I risked a lot of capital, not to mention profit, continuing to sit on my October expiration. So I locked in the profits, and I am looking to flip those profits right back into new call options and then ride on the “house’s money.”

FSLR was a much more complicated and extended trade. In late August I warned that FSLR looked like a value trap. A month later, I sold a long-term put option (expiring January, 2018) on FSLR based on buying that met my rules for bottom-fishing. The roller coaster that is FSLR continued from there. I felt like a genius for a little over a month. After that, FSLR plunged below the price where I sold the put option, it rallied back three separate times before succumbing to a 4-year low at the end of March, 2017. A rally from there was capped by last week’s Trump-driven rally: the market suddenly got inspired by the prospect of Trump draping solar panels over a Mexican border wall in order to generate income to pay for the project. That moment of giddiness seemed like a perfect time to close out my trade. While FSLR barely traded above the point at which I sold the put option, enough time premium had eroded to reduce the value of the put by 50%. It was a fresh reminder on the value of selling long-term puts on strong companies facing significant selling pressure.

On the bearish side, I threw up the white flag on Chipotle Mexican Grill (CMG). On June 20th, I speculated on a call option to play (hopeful) support at the 200DMA. The next day CMG cleaved right through that support and destroyed my call option. When CMG rallied the next day back to 200DMA resistance, I speculated on a put option. Sure enough, CMG promptly sold off again on Friday and generated enough profit on my put option to pay for most of my call option. CMG confirmed its 200DMA breakdown and now looks at risk for trading well below $400 again.

Also on Friday, I dove into the rapidly expanding blast radius that I will now call “the Amazon Panic.”

Sysco (SYY) is a very solid food service company. Yet, JP Morgan (JPM) dropped SYY from its focus list as an analyst there wrote of fears that AMZN could soon disrupt the entire food distribution business. I think such a fear is very premature and fails to take into account any competitive responses from the likes of SYY. I started my position by selling a long-term put option and buying a small amount of shares. I will continue accumulating on further weakness.

Finally, I completed a tranche of call options on the Financial Select Sector SPDR ETF (XLF). I was hoping for a pullback from XLF’s bullish breakout, and I got it last week. Now I need the 50DMA to hold as support… 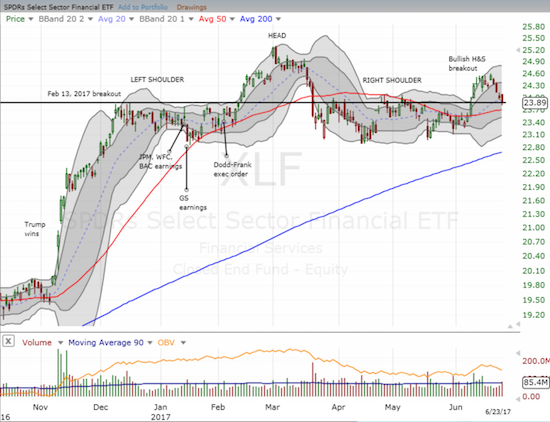