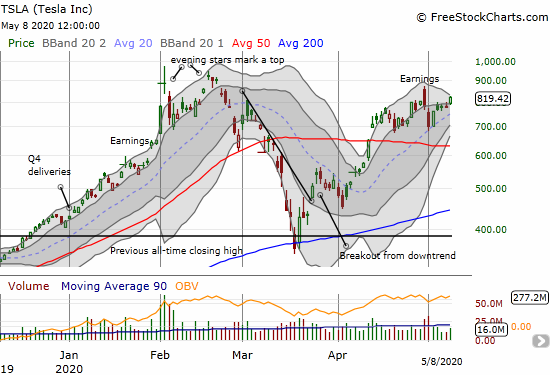 “…the most technical trade in almost any instrument has got to be Telsa stock….Investors love the company…there are some long-term and substantial holders…who are not inclined to sell…” – Michael Khouw, CNBC, May 8, 2020

The technicals are the main way I have come to understand and appreciate Tesla (TSLA).

Once again, the technicals are screaming about a potentially major formation: the Bollinger Band squeeze, or BB squeeze. Bollinger Bands (BBs) are a measure of price ranges for a stock based on its volatility. BBs are typically defined as 1 and 2 standard deviations from the 20-day moving average (DMA). In the chart below, the lighter gray areas define the space between the upper and lower BB lines. Note that these bands are narrowing and closing in on each other as volatility rapidly declines in TSLA. This process is the BB squeeze. When price action breaks out above or below this squeeze, it typically leads to large and sustained moves in the direction of the breakout.

While neither Khouw nor CNBC’s favorite technician, Carter Worth, pointed out this BB squeeze process, I think it looks significant…especially given the latest logjam of headlines surrounding Tesla.

Tensions are not only building in the price action. Tesla’s famous leader and innovator, Elon Musk, is also the center of rising tensions. First there was the mysterious tweet about TSLA stock being priced too highly. The shocking tweet came the day after earnings and caused a 10.3% decline for the day. Amazingly, traders and buyers quickly moved on and within a week closed the stock at a 2+ month high.

More important are the rising political tensions surrounding the closure of the Tesla Fremont plant in the wake of the coronavirus, COVID-19, pandemic. Musk failed to get the plant designated as an essential business when the shelter-in-place orders went out in mid-March. Alameda County rejected the request. With businesses opening up again, Tesla tried again and failed. Politicians are taking very public positions on the matter. Fremont’s mayor Lily Mei issued a supportive statement as part of a civic alert:

“As the local shelter-in-place order continues without provisions for major manufacturing activity, such as Tesla, to resume, I am growing concerned about the potential implications for our regional economy.  We know many essential businesses have proven they can successfully operate using strict safety and social distancing practices.  I strongly believe these same practices could be possible for other manufacturing businesses, especially those that are so critical to our employment base. The City encourages the County to engage with our local businesses to come up with acceptable guidelines for re-opening our local economy…”

As a civic alert, the City of Fremont automatically tweeted out a link to the statement.

Clearly, tensions are running high. Tesla has filed suit against Alameda County and characterized the county as going against the grain of other jurisdictions. Tesla claims that California Governor Gavin Newsom’s plans for opening up the state allow Tesla to restart. The plans of other California counties do the same. Even Santa Clara county “have stated in their return to work order FAQs that the manufacturing of distributed energy resources (which is defined in state law to include electric vehicles, solar and battery storage) is permitted to resume.” Tesla also provided detailed safety plans in its blog post making the company’s case.

With this kind of drama, I am expecting sympathetic buyers to pay up for more Tesla stock…adding to what I currently assume is pressure to resolve the BB squeeze to the upside.

Finally, Tesla received some good funding news. Tesla Shanghai entered into a credit agreement with the Industrial and Commercial Bank of China Limited, China (Shanghai) Pilot Free Trade Zone Special Area Branch for an unsecured revolving facility of up to a total of RMB 4.0 billion. At the time of writing, that is worth $560M. From the 8K filing:

This unsecured loan is impressive by itself as a show of support for Tesla from China. This feat is even more impressive given the increasingly toxic political and economic relationship between the U.S. and Chinese governments. Accusations about malfeasance and negligence in handling the COVID-19 pandemic are ringing the latest sour notes. If Tesla can sail through THOSE tensions, they will likely get through the California mess as well.

I like Khouw’s positioning on TSLA with the 1×2 put spread: buy a June $685 put spread and sell 2 June $650s for a $12.50 premium and a $602.50 breakeven point. Given TSLA’s rebound off 200DMA support during the market crash, I think the odds are very high TSLA will hold $630 support at its 50DMA over the next month or so. The odds are also good that TSLA holds support around $700 as it has done for the past month.

This trade works best for people with the big money. I am taking a more modest and even shorter-term approach: I am going into this week with a weekly $850/$865 call spread and a weekly calendar call spread at the $900 strike. I am expecting the BB squeeze to resolve to the upside by the end of the week. If not, I should still have the long side of the calendar call spread in hand to play the second week. If everything goes terribly wrong – like traders suddenly remembering that Musk thinks TSLA’s price is too high – I am carrying a small number of shares short to recoup on a downside resolution of the BB squeeze. The worst case outcome is absolutely nothing happens for two weeks.

(See swingtradebot.com to scan the stock market for traditional BB squeezes defined as an event where “volatility has fallen to low levels and the Bollinger Bands Bandwidth has narrowed to near 6-month lows.”