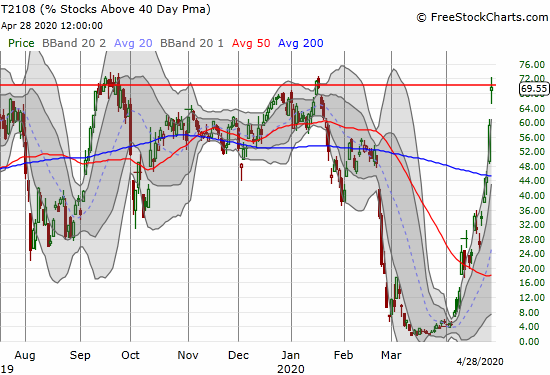 The stakes are ever higher. Right alongside confirmations of major breakouts from the major stock indices, AT40 (T2108), the percentage of stocks trading above their respective 40-day moving averages (DMAs), rushed toward overbought levels. Is this finally a topping process for the stock market or will stocks continue to catch up and ride along the bullish breakouts of the major indices?

The S&P 500 (SPY) lost 0.5% after trading as high as a 1.5% gain. The fade took the index back to the bottom of its upper Bollinger Band (BB) and under the “double top” formed by the twin rebound highs. The previous day, the S&P 500 bullishly confirmed a 50DMA breakout.

The NASDAQ (COMPQX) lost 1.4% after gapping higher. Like the S&P 500, the tech-laden index closed at the bottom of its upper-BB channel. The NASDAQ reconfirmed both a 50 and 200DMA breakout last Friday. The NASDAQ remains in a very bullish position.

The volatility index (VIX) bounced off a 2-month low to close flat on the day. While the VIX is back in the middle of its downtrend from the March highs, it now looks poised to try for another break from the downtrend.

My favorite technical indicator has made a heroic move off the March lows. After languishing for what seemed like an eternity in single digits, AT40 spent much of April soaring. The move to the threshold of overbought trading conditions, where 70% of stocks are trading above their respective 40DMAs, looks parabolic.

The rush of this move increases the odds that AT40 will suffer a notable setback in coming days. So if AT40 somehow manages to push higher, I will be bracing for one of those historic, extended overbought periods.

The major indices are in bullish positions even with the S&P 500 (SPY) yet to break out above its 200DMA resistance. AT40 is providing a counterpoint with its rush to the overbought threshold. By rule, I switched my trading call to neutral and came off my cautiously bullish stance. AT40 is close enough to the 70% overbought threshold, and there is no reason for me to wait to flip my trading call given my buying interest is now focused on looking for dips. Still, given the bullish positioning of the major indices, I have absolutely no reason to or interest in shorting the market at these levels. A switch to a bearish short-term trading call will require at least a 50DMA breakdown from the S&P 500. Even then, I would be reluctant to switch until/unless the NASDAQ followed up with its own breakdown.

Booking Holdings (BKNG) has been drifting for most of this month, reluctant to give its 50DMA a good push and challenge. The declining 50DMA is now forcing the issue. I am watching closely to see whether BKNG can join the ranks of stocks making bullish breakouts above major downtrend lines.

Suddenly, home builders are reporting great news and soaring post-earnings. The results have pushed the iShares Dow Jones U.S. Home Construction ETF (ITB) into a 50DMA breakout. I certainly did not expect such a move for many weeks, perhaps months to come. I am scrambling to read all the earnings reports from builders to cobble together a mosaic of this apparent swing in sentiment. It was just two weeks ago when an historic plunge in home builder sentiment suggested lasting doldrums. Perhaps there is a great divide between the public and the private builders!?