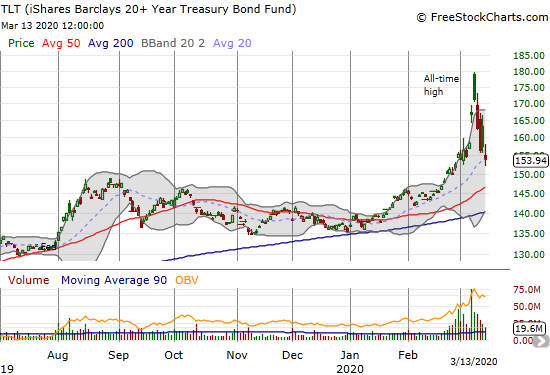 “…note that the bond market went parabolic last week; iShares Barclays 20+ Year Treasury Bond Fund (TLT) soared 5.2% alone on Friday. Parabolic run-ups are built NOT to last. The ironic next move will be for bond yields to soar on inflationary expectations from super-easy monetary policies and super-stimulative, turbo boosted fiscal policies with debts piling up in astronomical amounts.”

I define a parabolic move as a rapid run-up in price that takes the price chart well above its upper Bollinger Band (BB) during the run-up. The definition of “rapid” depends on a comparison with past price history. The BB measures the historic range of prices and contains about 95% of the expected price action (also known as two standard deviations above and below the average). Price action that goes above (or below) the Bollinger Band is thus considered extreme…and particularly unstable in the case of run-ups.

Parabolic run-ups in asset prices are some of the most intoxicating and dangerous price moves in financial markets. From the sidelines, you can feel like a fool for not participating in such “easy money.” From the belly of the frenetic trading, you can feel anything from relief to exhilaration with membership among the stampeding herd. Yet, the very fuel that powers parabolic run-ups inevitably runs out.

Fear consumes too much energy and exhausts itself. Other forces respond to the catalyst driving up prices, a kind of Newton’s third law of motion that works against manias: “For every action, there is an equal and opposite reaction.” In the case of financial markets, for every buyer there is a seller (and vice versa). At some point, prices get so high that more participants realize the risk/reward favors taking profits. When too many sellers appear, prices take the elevator down in search of buyers: lower and lower prices are required to entice buyers to participate in the frenzy. Moreover, financial or corporate authorities take actions that work against the catalyst driving the panicked buying. In the case of government, monetary and fiscal policies respond to the emergency generating the panic. In the case of the private sector, companies take advantage of the irrational pricing to issue more stock and/or they interpret the run-up as license to make bold and ill-advised bets on acquisitions and other ventures.

So even with expectations of the inevitability of zero interest rates, I looked at the bond market as extremely overbought. I NEVER trust parabolic run-ups and by rule assume they will end poorly. The only question is the amount of time it takes for the top to appear. With bonds at such high prices, I even reduced exposure to bond funds I had accumulated when I was neutral to bearish on the stock market and moved the money back into stock funds (so far, plain hard cash has fared the best!). After I called out the unsustainable nature of the bond market’s parabolic move, the iShares Barclays 20+ Year Treasury Bond Fund (TLT) soared in one last parabolic gasp. Trading started last week with TLT gapping up to a mind-boggling +7.8% open. The sellers stepped in with a vengeance from there and have barely rested since.

I use the adjective “mind-boggling” because “safe” assets are simply not supposed to deliver such wild price swings. When they do behave this way, the system is clearly unstable…and that instability generates the opposing forces that strive to create stability. I posted the following quote in my last Above the 40 post as the New York Federal Reserve described the massive amount of money and liquidity it threw at the bond market:

“These changes are being made to address highly unusual disruptions in Treasury financing markets associated with the coronavirus outbreak. Reserve management purchases into the second quarter will continue to be conducted with this maturity allocation. The terms of operations will be adjusted as needed to foster smooth Treasury market functioning and efficient and effective policy implementation.”

From its intraday all-time high to last week the iShares Barclays 20+ Year Treasury Bond Fund (TLT) lost 14.3%. From breakout to intraday top, TLT gained 19.6% in 10 trading days. Alarm bells should automatically trigger in the minds of traders and investors on the way up and down. Given my on-going bullishness on the stock market during the current extreme selling conditions, I now see the near complete reversal of the iShares Barclays 20+ Year Treasury Bond Fund’s frenzy as a buying opportunity. I need the hedge to feel more comfortable in my accumulating positions AND I want to sit still in a bet on the inexorable march to zero interest rates. In other words, while TLT has topped out for now, I suspect that last week does not represent THE top.

I find it ironic that a safe haven asset provided such a textbook lesson in the instability of parabolic moves. However, I find reassurance during these abnormal and extreme times that a key “law” of financial physics remains well intact.