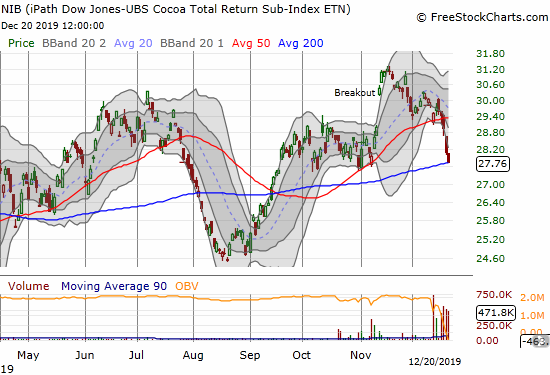 A Breakout and Reversal

The price of cocoa has had a wild two months. Last month’s breakout quickly turned into a fade and an outright sell-off in December. The result for the iPath Bloomberg Cocoa SubTR ETN (NIB) is a complete reversal of the breakout, a return to the bottom of the previous consolidation range, a test of support at its 200-day moving average (DMA), and a buying opportunity.

Based on my read of the recently released November Monthly Review of the Cocoa Market Situation from the International Cocoa Organization (ICCO) and the news reports for December, the cocoa market has swung from a condition of feared tight supplies and high demand to higher than expected supply.

For November, the ICCO reported “three stages” of price developments. In the first stage, cocoa arrivals for Ghana and the Ivory Coast were higher than expected. During that time NIB continued the consolidation that started in late September. Over the next week, grindings were higher than expected. Moreover weather conditions worsened with above average rains in cocoa-growing regions, creating fears rose about black pod disease (concerns about black pod disease carried into early December). NIB broke out during this time. The rally was short-lived as improved weather conditions quickly dampened buying enthusiasm in the market.

The ICCO’s monthly report was buffeted by challenges to the efforts of Ivory Coast and Ghana to limit production and raise cocoa prices. Reuters reported on December 12th that farmers in Ivory Coast are threatening to increase production despite their country’s effort to cut overall production from 2.2 to 2.0 million tonnes for the 2019/2020 growing season. Apparently the promise of increased income from higher prices is not enough incentive to farmers who lack alternatives for income. Some farmers have also already put in place production plans that they do not want to (or cannot) cancel.

Chocolate makers present another challenge. Reuters recently reported that these companies are scaling back commitments to buy cocoa and negotiating prices down in other parts of the supply chain to compensate for a $400/ton surcharge called the living income differential (LID). The Ivory Coast and Ghana plan to use the LID to guarantee an income floor for farmers. The candy makers – the likes of Barry Callebaut, Mars Wrigley, Nestle , Mondelez, and Hershey’s – have publicly supported the LID but may be acting otherwise. For example, companies stockpiled cocoa beans over the summer ahead of the implementation of the LID.

The European Union (EU) is also actively looking to expand the supply base. For example, the Daily Monitor reported earlier this month that the EU is pledging loans to expand cocoa production in Uganda. The industry remains very small in the country but Constantine Bwambale, the chairperson of the Uganda Cocoa Association, is (of course) confident in the country’s potential:

“Cocoa growing is suited in many districts in Uganda and requires less labour than coffee. It also gives good returns compared to many other crops…”

Demand and the Longer View

On balance, I am encouraged by the strong trend in demand. According to the ICCO’s November report (emphasis mine)…

“The revised estimates published by the ICCO Secretariat in its latest issue of the Quarterly Bulletin of Cocoa Statistics show an increase in world grindings of 4.6% during the last season. Grindings reached 4.807 million tonnes, up by 211,000 tonnes. This new estimate is evidence of the expansion in demand which is especially reflected in the steady growth of cocoa processing in Asia and Oceania as well as origins countries. Processing activities are estimated to have grown by 14.3% to 1.201 million tonnes in Asia and Oceania and by 2.9% to 991,000 tonnes in Africa, whereas the Americas’ increase was of 2.8% to 897,000 tonnes. Grindings in Europe slightly progressed by 0.5% from the previous season to 1.719 million tonnes.

The below weekly chart of iPath Bloomberg Cocoa SubTR ETN (NIB) reminds me that the price of cocoa is slogging through a very slow and reluctant recovery from 2016’s big sell-off. A sharp rally last year nearly completely reversed in the back half of the year. A slow trend has returned since then with approximate higher lows and higher highs. This is the range to target buying and selling until NIB establishes a firmer uptrend.