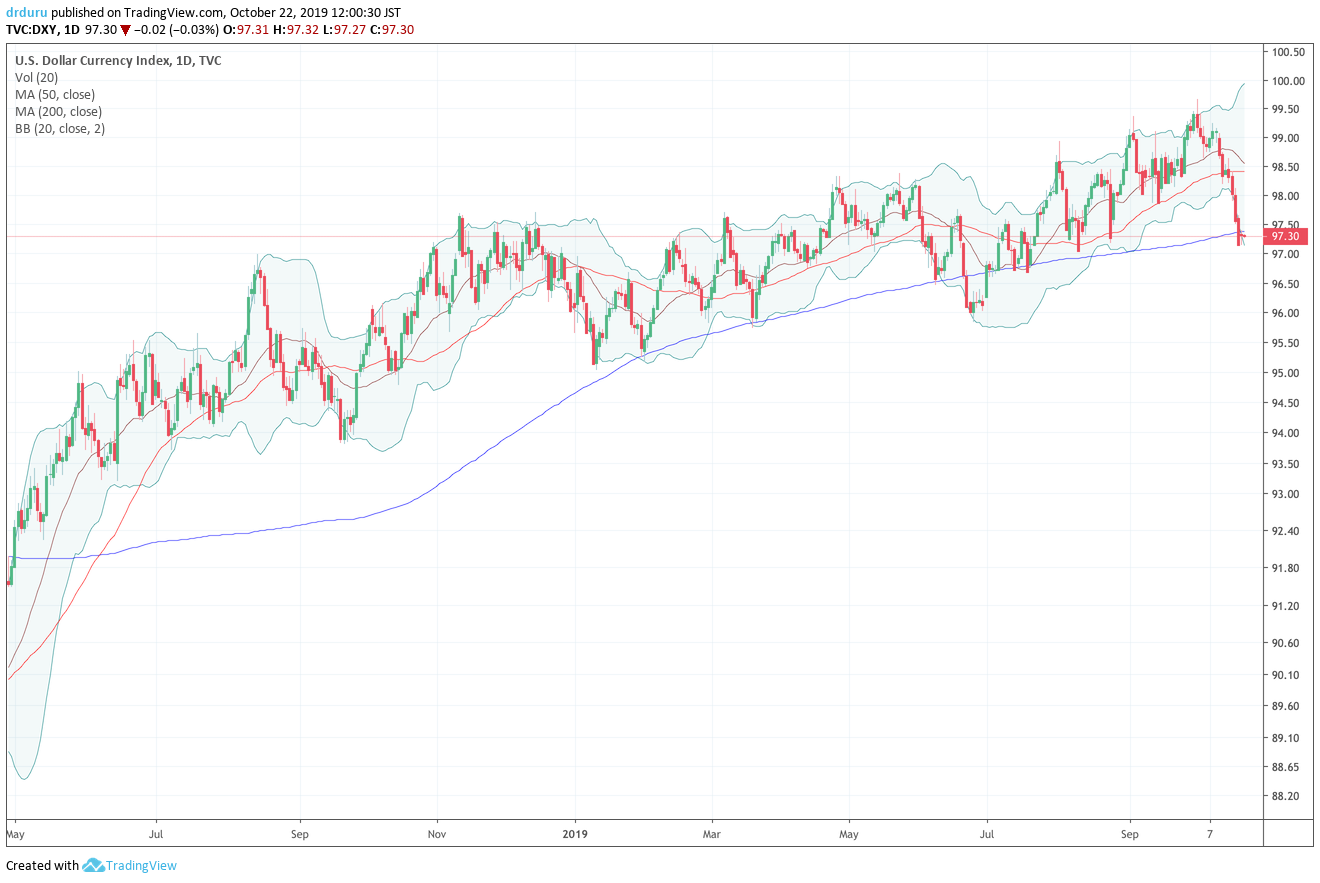 With the U.S. dollar index (DXY) last tested its 200-day moving average (DMA) support, I pondered the possibilities for a breakdown. The U.S. dollar index typically sustains moves through its 200DMA, whether a breakout or a breakdown, so I braced myself for the need to jettison my long dollar positions. Instead of follow-through, the U.S. dollar index soon rebounded and even pushed to a new 2+ year high before resuming its dance with the 200DMA. The index is right back to 200DMA support on the heels of its most persistent daily decline since August to September, 2018.

Unlike the last 200DMA test which caught me aggressively bullish on the U.S. dollar, this time around, I came into this test much less bullish on the U.S. dollar. A prime drivers for my net bearishness were the signals coming from strengthening emerging market currencies on the optimistic build-up into a deal between the U.S. and China over their Trade War. I used this opportunity to take profits on my short USD/CAD position, but I am continuing to hold onto my long AUD/USD position.

I was short USD/CAD as a way to play earlier weakness in the U.S. dollar and as a bet alongside what the Bank of Canada called a convergence of Canadian economic strength and U.S. economic softening. The abiding Trade War optimism should allow me to confidently fade rallies in USD/CAD going forward absent materially negative Trade War news.

Like USD/CAD, I held AUD/USD as an earlier bet on U.S. dollar weakness. My first entry was untimely as it came just ahead of a plunge in the price of iron ore. At the time, I decided to hang on and over time I got confident enough to accumulate a larger position. AUD/USD now trades back to its September peak, but remains well below its declining 200DMA. I am still holding out for a test of that resistance. The abiding risk with the Australian dollar is a Reserve Bank of Australia that is staunchly dovish despite driving rates to fresh all-time record lows. From the last statement on monetary policy on October 1, 2019 (emphasis mine):

“It is reasonable to expect that an extended period of low interest rates will be required in Australia to reach full employment and achieve the inflation target. The Board will continue to monitor developments, including in the labour market, and is prepared to ease monetary policy further if needed to support sustainable growth in the economy, full employment and the achievement of the inflation target over time.”

The euro is my most interesting trade decision. I have remained staunchly bearish on the euro for a very long time. I cannot even remember the last time I traded long on EUR/USD. I have faded many rallies in EUR/USD, including the current one. The euro’s oversized weight (about 52%) in the U.S. dollar index makes EUR/USD a close inverse proxy to the index. Accordingly, EUR/USD is approaching declining 200DMA resistance. Given EUR/USD broke its primary downtrend as defined by the delcining 50DMA, I fully expect at least a test of 200DMA resistance. A false breakout similar to last summer would not surprise me. I will continue to accumulate short EUR/USD along the way.

Next week’s decision on monetary policy is the most immediate wildcard for the U.S. dollar. Yet, I do not think the Fed will have anything to say important enough to drive a sustained move in the U.S. dollar index. With a rate cut well-anticipated, all else being equal, I am assuming the Fed-related risks to the dollar are weighted to the upside. The market is clearly quite comfortable with the notion of an increasingly dovish Fed even though a Trade War moving in the right direction reduces the need for the Fed to worry about future economic weakness.