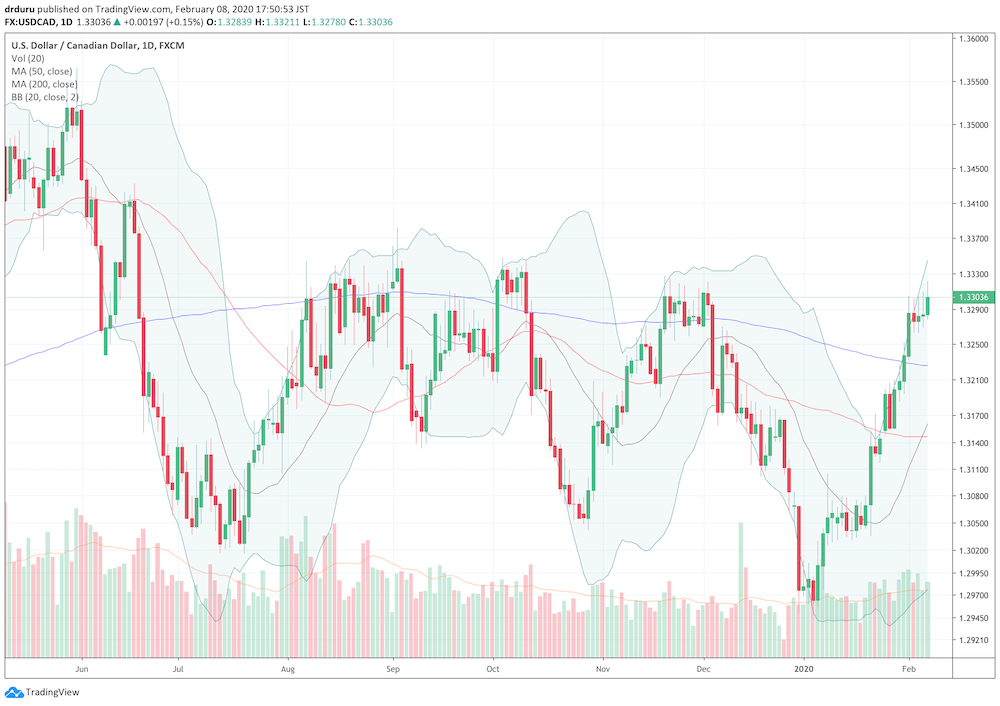 The opening statement from Governor Stephen Poloz said it all (emphasis mine):

“For this decision, we began the exercise with reduced downside risks coming from outside Canada, as expected, but at the same time, a crystallization of some domestic downside risks. After taking these developments on board, our analysis suggested that overall excess capacity in the Canadian economy has increased, which will bring a degree of downward pressure on inflation over the projection horizon.”

The statement looks relatively innocuous, especially given the larger context of the statement where the BoC goes to great lengths to paint a picture of balanced risks. The Bank even predicts GDP growth will go from 1.6% in 2020 to 2.1% in 2021. However, inflation targeting is a main goal of the Bank, so when I read “downward pressure on inflation”, I think “the Bank is biased to the downside on rates.”

While the Bank of Canada did not change its main policy rate, this downgrade in the outlook on the domestic economy means that rates are more likely to go down than up in the near-term. The main barrier between here and lower rates is the Bank of Canada’s concern for increasing “financial vulnerabilities.” Back in October, these financial vulnerabilities apparently stopped the Bank from cutting rates:

“In October, we deliberated whether the downside risks coming from outside Canada were sufficient to warrant a move to lower interest rates. At that time, we concluded that they were not, given the trade-off we faced against potentially fuelling increased financial vulnerabilities.”

The BoC seems more concerned about the potential downsides of lower rates than other major Central Banks, but something like a further drop in oil prices would be enough to tip the Bank over to cut rates.

During the press conference, Poloz observed that domestic risks have increased from growth slowdown at the end of last year. Yet, he and the Bank of Canada are optimistic in increased global indicators: they cite “stabilization” and positive developments in trade negotiations. From the Monetary Policy Report:

“Global trade and investment are expected to strengthen over the projection horizon, although only modestly. This is because past increases in tariffs and ongoing uncertainty will continue to take a toll on activity. This drag on global growth is expected to gradually dissipate. However, the total impact of these trade tensions leaves the level of global gross domestic product (GDP) 1.2 percent lower by the end of 2021.2 The impact of trade tensions is marginally smaller than what had been incorporated in the October projection, reflecting the recent Phase One trade agreement between the United States and China.”

These observations came before the spread of the coronavirus exposed more weaknesses in the global economy. So I will not be surprised if global pressures motivate a rate cut from the Bank of Canada perhaps as soon as the next policy meeting. During the press conference, Poloz danced around the prospects for cutting rates after multiple reporters asked related questions.

USD/CAD started the year at a 15-month low. USD/CAD now sits at the top of an 8-month trading range. The Bank of Canada’s announcement on monetary policy sent USD/CAD soaring into its 50-day moving average (DMA) and the upward momentum has not slowed since then. From a technical perspective, shorting USD/CAD looks good just as a play on the trading range. If USD/CAD breaks out, I will have to take my losses and reverse my outlook. During the run-up, I never even considered the possibility of USD/CAD returning to current heights.

Alongside the rebound in USD/CAD is a rebound in the U.S. dollar index (DXY). Despite an extended 200DMA breakdown, DXY last week broke out from 200DMA resistance and suddenly looks set to challenge former highs. So a short on USD/CAD is also a partial bet that DXY itself has little additional upside.

My currency outlook contains a built-in tension given I expect the euro to return to its previous downtrend against the U.S. dollar. (I took profits on my latest EUR/USD short given last week’s sharp move). So it is very possible that I might short USD/CAD as a partial hedge to shorting EUR/USD. My confidence in euro weakness is greater than my confidence in strength in the Canadian dollar, so I will size appropriately if I do indeed end up with a hedging strategy.