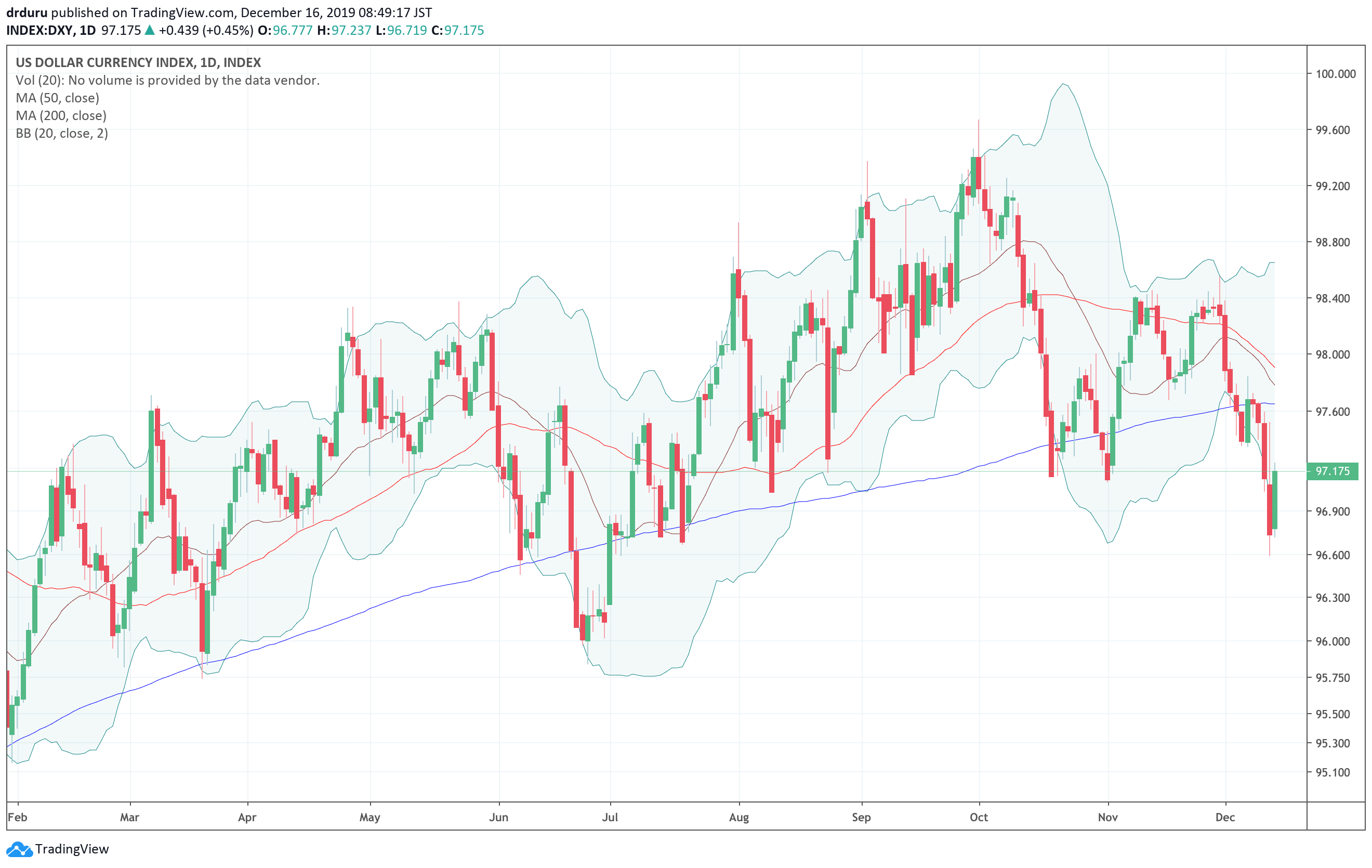 In the wake of the Federal Reserve’s last pronouncements on monetary policy, the U.S. dollar index (DXY) sold off and confirmed its latest breakdown below its 200-day moving average (DMA).

In Search of Inflation

I read through the transcript of the Fed’s press conference for clues to help me understand the dollar’s dive. One statement in particular caught my interest as it suggested the Fed will not even consider increasing interest rates for the foreseeable future:

“…in order to move rates up, I would want to see inflation that’s persistent and that’s significant, a significant move up in inflation that’s also persistent before raising rates to address inflation concerns. That’s my view…We haven’t tried to turn it into some sort of, you know, official forward guidance. It happens to be my view that that’s what it would take to want to move interest rates up in order to deal with inflation.”

Depending on your perspective, inflation has not moved up significantly nor persistently since before the Financial Crisis, maybe the 1980s. With such a history, inflation is not likely then increase significantly or persistently anytime soon. Powell’s claim implies that the Fed funds rate will not go higher for a very long time to come.

“It’s been very challenging to get inflation to be at target. If you look around the world, the United States, of all major economies, has been closest to it but still hasn’t quite been able to achieve it. And I would also point out that this year which has been a good year for the economy inflation– core inflation is actually running at 1.6 percent, whereas it ran close to 2 percent most of last year. So, it’s a real challenge.”

The Fed’s dovishness is not coupled with pessimism for the state of the economy. Indeed, the Fed remains “favorable.”

Household spending has been strong—supported by a healthy job market, rising incomes, and solid consumer confidence. In contrast, business investment and exports remain weak, and manufacturing output has declined over the past year. As has been the case for some time, sluggish growth abroad and trade developments have been weighing on those sectors. Even so, the overall economy has been growing moderately. And with a strong household sector and supportive monetary and financial conditions, we expect moderate growth to continue. As seen from FOMC participants’ most recent projections, the median expectation for real GDP growth slows slightly over the next few years but remains near 2 percent.”

Economic gains are even reaching people who have long failed to participate in general prosperity:

“People who live and work in low- and middle-income communities tell us that many who have struggled to find work are now finding new opportunities. Employment gains have been broad-based across all racial and ethnic groups and all levels of education. These developments underscore for us the importance of sustaining the expansion so that the strong job market reaches more of those left behind. We expect the job market to remain strong…

…there are a lot of things going on that suggest that people at the margins of the labor force are being pulled in and being given chances, which is a great thing.”

This is good news. However, if the economy actually will need more rate cuts, then I have to guess that progress for those left behind will continue to be excruciatingly anemic.

The current outlook suggests to me that the U.S. dollar’s rally should soon come to an end…if the dollar has not already topped out. Still, until some other major economy develops stronger economic fundamentals than the U.S. (Canada used to be a prime candidate), I do not expect the U.S. dollar to experience a strong sell-off. The stage looks set for an extended trading range until some fresh catalyst comes along. For now, I am trading for a rebound in the U.S. dollar index back to or through its 200DMA before gravity takes over again. At that point, I plan to short currency pairs like USD/CAD and go long AUD/USD (I have a standing short on EUR/USD that I remain very reluctant to close out).