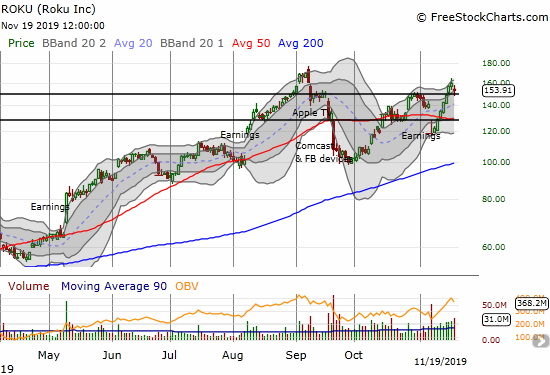 Roku (ROKU) is up an eye-popping 402% in 2019 year-to-date. ROKU surged off a 13-month low in December, 2018, and the run-up included three straight very positive post-earnings surges. The stock hit its closing all-time high at a stratospheric $169.86 on September 6, 2019. Soon after that milestone, competitive news from Apple TV (AAPL), Comcast (CMCSA), and Facebook (FB) took the stock down for its biggest sell-off of the year: a 41% loss in just three weeks. While ROKU proved resilient by recovering much of this loss as well as bouncing back from its first negative post-earnings reaction in a year, the stock now faces what could be a tougher test: insider and company selling.

ROKU dropped 3.9% on high selling volume in the wake of a double-whammy of news of insider selling. After the market closed on the 18th, the company announced that insiders lined up to sell 571,459 shares in an automated sell program. Roku listed the following insiders, each selling 100% of their beneficially owned shares, as part of an acquisition of Dataxu, Inc.:

The following morning, the company announced it would sell 1,000,000 shares through a distribution agreement with Citigroup Global Markets Inc. The company plans to use the proceeds as follows:

“We intend to use the net proceeds from this offering, if any, for working capital and general corporate purposes, including sales and marketing activities, research and development activities, general and administrative matters, repayment of debt, other business opportunities and capital expenditures. We may also use a portion of the net proceeds to acquire or invest in businesses, products and technologies that are complementary to our own, although we have no current commitments or agreements with respect to any acquisitions or investments as of the date of this prospectus supplement.”

In other words, the company wants to invest in its future growth and needs the capital to do so. At today’s closing price, these million shares would fetch a cool $154M. This sum is significant given the company’s current holdings of cash and equivalents of $386M. Roku will need a warchest to meet the challenges of growing competitive threats.

The Potential for A Top

In total, the shares going out to the market represent just 1.3% of Class A and Class B outstanding shares. These shares will hardly overwhelm willing buyers, but they could signal that the sellers think the stock offers little additional upside in the near-term. Sellers may have concluded that the downside risks outweigh the reward of waiting further to sell. The timing of this news coming with the stock rallying right up to the all-time high adds to the perception of a top. Perception can easily become reality with such an expensive and speculative stock.

According to Yahoo Finance, investors are currently willing to pay an astronomical 18x sales and 39x book for ROKU. At these sky-high levels, ROKU is priced for absolute perfection; the smallest pebbles can cause stumbles. Roku’s lack of profit adds to the speculative nature of the stock. The company’s loss from operations increased in the latest quarter from $11.7M in Q3 2018 to $26.5M. The story for the last the 9 months is worse with the loss from operations increasing from $18.8M to $47.7M. With the accumulation of these risks, I can only be bullish on ROKU because of the current price action.

As I discussed in “Disney Plussed“, last week’s relentless run-up caught me positioned too tentatively on the bullish side. I adjusted my positioning going into this week as a hedged long with a maximized profit profile around $160, so the day’s gap down caught me a bit flat-footed again. If ROKU continues to sell-off from here, I will realize maximum downside profit starting around $140.

Given the technicals shown in the chart above, I suspect the stock will trade around current levels and hold the breakout above the band I drew using the last key resistance and support levels. The pricing of the company’s offering should catalyze the next move as it should reveal the market’s appetite: priced too low and the stock could sell-off for an extended period. Poor demand for the shares would force a low offering price of $140 or lower.

I will continue to use the band to guide the next trades. Above the band, I will stay bullish. Even with insiders preparing for a top, eager buyers could still decide to ignore the bearish signals for quite some time. However, a drop into the band re-introduces the prospect for range-bound trading. A fresh breakdown below the band will be very bearish given it would also be a fresh breakdown below the 50-day moving average (DMA). I would get aggressively bearish on a fresh post-earnings closing low.