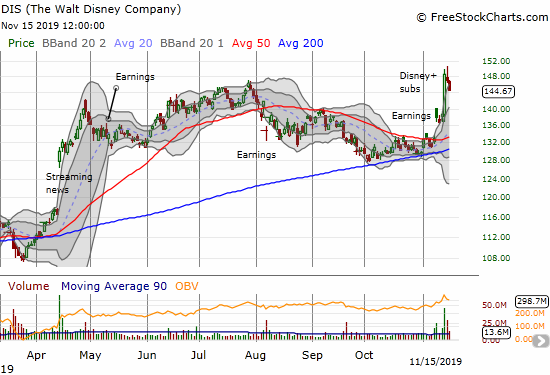 From Underwhelmed to Overwhelmed

Disney (DIS) finally officially jumped into the streaming wars with its introduction of Disney +. The service launched on November 12, 2019 with a press release announcing:

” Disney+, the highly anticipated streaming service from The Walt Disney Company, launched today in the U.S., Canada, and The Netherlands. With nearly 500 films and 7,500 episodes of television from Disney, Pixar, Marvel, Star Wars, National Geographic, and more, Disney+ is the exclusive home for some of the world’s most beloved stories as well as a robust slate of original content ready to be discovered.”

The news came several days after Disney reported earnings for its fourth quarter. Just like the earnings report and so many before, the news was essentially met with a collective yawn. Investors bought DIS up to a 3.8% post-earnings gain but faded the stock from its intra-day high. Investors barely reacted to the Disney+ news with a 1.3% gain on the day. It took the announcement of subscriber numbers to launch DIS to a new all-time high on the back of a 7.3% gain.

I was already poised to buy into Disney given the stock made a bullish breakout above its 50-day moving average (DMA) and above the wedge between 200DMA support and 50DMA resistance. I was just waiting for the stock to trade below its upper Bollinger Band (BB). The Disney+ announcement generated a small response but it was big enough to close DIS above its upper-BB again. I finally got my chance the next day as the stock sold down on concerns about early technical issues from a rush of subscribers.

DIS sold down to the lower part of the upper-BB, and I immediately bought December call options. I planned to buy more if the stock drifted further down, and I also prepared to buy shares to hold for the long-term. I never got the chance to increase my position. Shortly after my trade, Disney announced its acquisition of an incredible 10M subscribers. That news sent the stock surging. My call options were quickly taken out at my “hopeful” target of a double. By the close of trading, those call options were worth at least another 2x! While I of course regretted putting in my sell order so soon after the trade, I cannot complain about a double from getting Disney Plussed.

I am now eyeing the next stock trade.

The initial market excitement is already wearing off to the tune of a 2.7% pullback. I am targeting a 50% retracement of the Disney+ surge which is around $143.50. Needless to say, I will buy my call options alongside shares this time. I will also layer my call option configuration. I want to buy the December/January $150 calendar call spread and a March $150/$160 call spread.

This configuration lowers my cost for covering three scenarios. Over the next month, I am anticipating a slow drift back to the $150 level from the initial Disney+ pop. I am looking for the December $150 call option to expire worthless and then ride the January $150 call option higher. If I am once again too conservative in the near-term, then the March $150/$160 call spread will kick in profits. I am not buying the March $150 call option outright because it includes risk premium from February earnings. Moreover, I am assuming a $160 absolute cap on Disney between now and February/March.

If the near-term bullish scenarios never materialize, then I will be accumulating shares down to the uptrending line of 200DMA support.

The Attraction of the Trade

As a parent, I know Disney+ is a required purchase. I am betting millions of parents in the U.S. and soon worldwide will feel similarly compelled. Disney’s library also appeals to non-parents with classics like the Simpsons (I have a LOT of catch-up myself!) and old Disney movies. Anyone who has yet to buy up their assortment of Marvel movies, they now have a cheaper way to access those movies and more. The Hulu, ESPN+, Disney bundle should also attract another large cohort of TV viewers. In other words, I think Disney+ is a “no-brainer” for many millions more households. I strongly disagree with those who claim the interest in Disney+ will be short-lived.

I personally think Disney+ is a steal and under-valued, especially with Verizon giving its Unlimited customers a free 1-year subscription. Disney’s aggressive pricing should establish a firm foothold from which to give viewers more and more reasons to stick around. Dare I say it, some may decide to economize and drop other streaming services? The near-term financial results will not look good as Disney makes this aggressive investment. To the extent these numbers attract pessimism, I will be interested in buying into the related dips.

The Roku streaming service can serve up Disney+. Perhaps it is coincidence, but I cannot help notice the recent run-up in Roku’s stock continued apace after Disney’s announcement.

Roku (ROKU) has experienced an amazing post-earnings recovery as part of an overall impressive display of resiliency. The day before Disney reported earnings, ROKU gapped down below its 50DMA with a 16.0% post-earnings loss. The stock looked “done” at that point and destined to soon return to $100. Instead, ROKU ended last week at its fifth highest close ever after six straight days of high-volume buying.

Whether Disney is a part of the resurgence or not, ROKU is firmly back in a bullish position. The stock blew through two calendar spreads I set up last week. So I am now navigating a “Phase 2” strategy to salvage some profits from what I thought was an appropriately conservative bullish positioning (the potential connection to Disney+ did not even occur to me until I sat down to write this post!). I have a short position and put spread as a fallback if ROKU suddenly runs out of gas. My ideal scenario has ROKU stalling between Friday’s close and $165 in the coming week. From there, I will reposition in a “cleanly” bullish position.