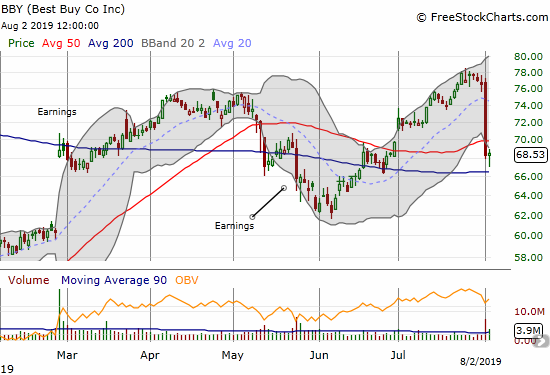 Regular readers know that my favorite trades come on the heels of extremes in financial conditions. After President Trump announced a 10% tariff on $300B of Chinese imports, I saw a lot of extremes that made me sit up and take notice. One of the biggest extremes occurred in the shares of Best Buy (BBY).

The latest expansion of the U.S. versus China trade war will impact a lot of retail goods just ahead of purchases for the Christmas holiday shopping season. Retailers like Best Buy suddenly face much higher costs on imported goods and face reduced revenues and/or profits in the face of consumer reluctance to pay higher prices. Marketplace provided yet another piece explaining and confirming that U.S. consumers are paying for these tariffs.

Still, a 10% drop in BBY that instantly erased over a month of impressive gains looks extreme for now. Accordingly, I bought some Aug 23 $72 call options when on Friday sellers took BBY down to support at its 200-day moving average (DMA). I picked that expiration to avoid paying a premium for an earnings report the following week before the market opens on August 29th.

A 200DMA breakdown for BBY would be very bearish and a sign the market is betting on a heavy Trade War hit for BBY. After my purchase of calls, I realized that this latest extreme in trading would be well-suited for a pairs trade. I failed to find anything that satisfied me until I reviewed Friday’s segment of CNBC’s Options Action. The crew delivered a very convincing case to buy October $40 put options on the iShares MSCI Emerging Markets Index Fund ETF (EEM) as a bet on further global damage from the expanding Trade War.

If the Trade War worsens with the tariffs going into effect on September 1st, compounded by whatever retaliation China generates, EEM should easily challenge its low for the year at $38.40. I think a very bearish breakdown from there would also be in the cards.

If the Trade War improves and/or Trump’s threat turns into another attempt at a negotiating tactic, BBY could easily and quickly reverse its entire 10% loss. The tricky part of my trade is that the new tariff threat may linger all the way up to September 1st. If so, I may use the short window after August 29th earnings to refresh the BBY trade or move on to another pick. I will also be looking in the coming week for other stocks that get extreme trade war damage where the next earnings report comes in October.

The U.S. dollar index (DXY) is an interesting wild card. The dollar actually got hit in the wake of the latest Trade War threat. Another strong jobs report on Friday was apparently not enough to arrest the slide. A weakening dollar should act as a cushion against turmoil in emerging markets. If last week’s dollar breakout was a fake-out, then the index will likely slide right back to a new test of 200DMA support.