For the past few months, I pestered my youngest brother to write a review of his cogent 2009 analysis of the housing market. In that post, he predicted housing would bottom in April, 2010 and as late as 2013 in a worst case scenario. He has finally produced the follow-up, and I post it below.

In his latest post he posits the housing bottom was actually in March, 2009 but prices will bounce along the bottom until 2013. He was also kind enough to examine each of his prior predictions for their accuracy. Of course, it is always more fun to conduct such an exercise when you nail most of the analysis. I expected nothing less from him.

The following analysis contains his own words with some editing from me. I am just as convinced as I was last year, and I am thrilled he is too busy to bother blogging so I get to post his work here. (Note well that this was written before Tuesday’s release of the latest Case/Shiller Index).

When housing prices started to decline dramatically around 2008, I made a prediction of a national home price bottom in April of 2010 based primarily on looking at patterns of home price declines in regional recessions over the last 30 years.

In August of 2009, the home price decline appeared to be more severe than most predictions (including mine). The May 2009 Case-Schiller Housing Price index data was the most recent available at that time. It showed an 18% y-o-y decline in national prices, and it showed a 0.5% m-o-m increase – following 22 months of consecutive monthly declines. There was an emerging debate about whether or not shadow inventory existed, and whether the banks were intentionally delaying foreclosures to keep that shadow inventory at bay. Mortgage delinquencies were at a post-Depression high of 6% and increasing in parabolic fashion. Loan modification programs were operating, but their success was in doubt. Unemployment was above 9% and still rising. The one bright spot was that the stock market was 50% off of its March 2009 lows.

In this environment of uncertainty in the fall of 2009, I re-examined my April 2010 housing price bottom thesis. I looked at home prices taking into account employment, mortgage delinquencies, walk-aways, civil unrest, interest rates, and behavioral economics. After this analysis, I stuck with my April 2010 bottom thesis with the additional caveat that home prices would probably stay nominally flat through 2013.
This post re-examines these predictions.

There is still a lot of bad news in the housing market. However, the drops of good news in the housing market are instructive about its future direction. First, let’s look at the number of loans that were current at the beginning of the year and are 60+ days delinquent or in foreclosure in May. This is shown below from 2006 to 2010 – first for May 2010, then for August 2010. This is provided courtesy of LPS Mortgage Monitor June 2010 Mortgage Performance Observations. The good news is that across all loan types, the number of new delinquencies is down. Using a trend line for either of these two months, it seems reasonable to assume that by 2012, new delinquencies will return to normal. 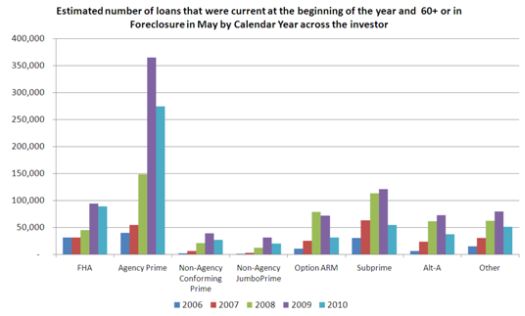 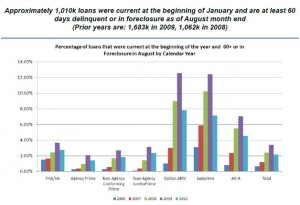 
LPS also provides data on the number of loans that are delinquent, in foreclosures and REOs – the so-called shadow inventory. As of August 2010, this shadow inventory was about 7.3 million. This is 10% less than the January 2010 peak of 8.0 million and roughly equivalent to the 7.2 million of August 2009. So this is trending in the right direction.

RealtyTrac reports that 33% of all homes sold are REOs, short sales, or delinquent. Factor this in to the roughly 5 million in total home sales where we seem to be trending, and these sales equate to a 1.7 million annual decrease in the shadow inventory per year. That means it will take 3.5 years to burn off the excess shadow inventory based on these trends. This is consistent with the flat home prices I projected through 2013. I still think this is the most likely scenario. The best case scenario includes home sales of 6 million in 2011 and 2012 combined with 50% of these sales as shadow inventory. Even under this optimistic scenario, it will take 2 years to burn off the inventory. Based on this analysis, I am sticking with my thesis of flat home prices through 2013.

Caveat #1: The March, 2009 Bottom
The one thing I know for sure is that my prediction of an April 2010 bottom is wrong. At least, it is wrong according to my favorite home price tracker, the Case-Schiller Housing Price Index. According to this index, a bottom was achieved in March 2009, and we are actually already up 7% above these lows. It seems unlikely that we will decline enough to crack this low. Fall and winter are the traditional home price decline seasons, but in the Fall of 2009 and the Winter of 2010, the declines were only 2%. Prices could decline 10% from here and technically establish a new low in March/April, 2011. However after the 32% decline from the housing price top to the March 2009 bottom, this kind of price adjustment is mainly noise. For all practical purposes, the bottom was achieved in March 2009 and it is looking like a sideways trend through 2013.

There is no double-dip in housing on the horizon. Unless unemployment gets worse, housing will continue to stabilize. There is no cause to worry unless weekly claims go above 500,000 or if the total number of people employed shrinks. The shadow inventory is large at 7+ million, but it is ironically not distressed inventory. The big banks are the ultimate owners of this inventory, and they can hold these for several years without any financial strain. I reviewed the earnings report presentations of the big banks, and none of them are pressed to dump this inventory or raise cash. Most of them actually had significant reductions in their reserves for loan losses indicating that they are not concerned about the potential losses from this inventory. Unless banks start to scramble for cash, this inventory will continue to be released slowly without significant damage to home prices.

Caveat #2: National vs. Local Prices
This analysis only refers to national prices, and cannot be extended to local home prices. Home prices are diverging radically between cities. Prices can even diverge dramatically within a single city. For example, Case-Schiller shows home prices up in the S.F. Bay Area by 21% year-over-year. On the other hand, prices in New York hit a new low in April 2010, and six other metro areas had new lows in March 2010. In Atlanta – the only market I track at the sub-market level – some zip codes have half as much inventory as they did 2 years ago, and others have 20% more than last year. You can imagine how these inventory balances impact prices in these two zip codes. If you are thinking of buying or selling a house right now, you have to know your city and your neighborhoods to know whether the time is right.

For therapeutic reasons, I also re-examined my September 2009 conclusions one-by-one with new commentary shown below in bold. This retrospective doubles the writing, but it is a worthwhile exercise given few people return to previous predictions to review their accuracy (or lack thereof). Some of the points below are similar to those listed above.