(This is an excerpt from an article I originally published on Seeking Alpha on March 3, 2014. Click here to read the entire piece.)

The bubble chart below enhances the chart I showed in the last piece on the January barometer. Here, I have layered in the performance of the subsequent February using bubble size to indicate the magnitude of the change in the S&P 500 for a given February and using color to indicate the direction of the change – white for negative (an unfortunate limitation of Microsoft Excel), green for positive. {snip}

As bad as January is at predicting down years, it turns out the remaining months fare worse, sometimes a lot worse. {snip}

While no pattern exists amongst the months to signal the high likelihood of a down year, down years are distinct from up years in the number of negative monthly performances. {snip} 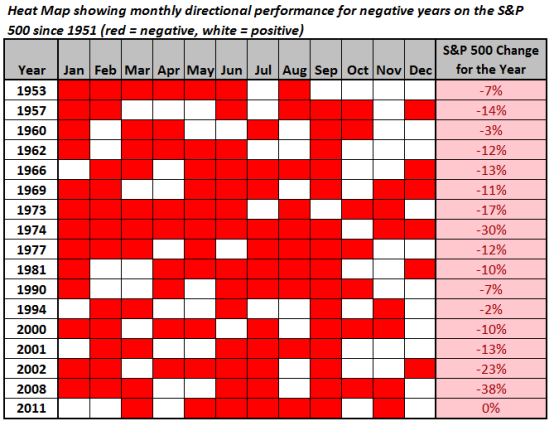 Source for price data in all charts: Yahoo Finance

1974 sticks out as the most brutal – all but one month performed in the red. Otherwise, the pattern seems to be a streak of negative performances occurs in the beginning of the year or in the middle. {snip}

Overall, I think these various nuanced views add more color than the simplistic January barometer. There is of course still no magic crystal ball, but there are interesting monthly patterns to reference throughout the year.

(This is an excerpt from an article I originally published on Seeking Alpha on March 3, 2014. Click here to read the entire piece.)