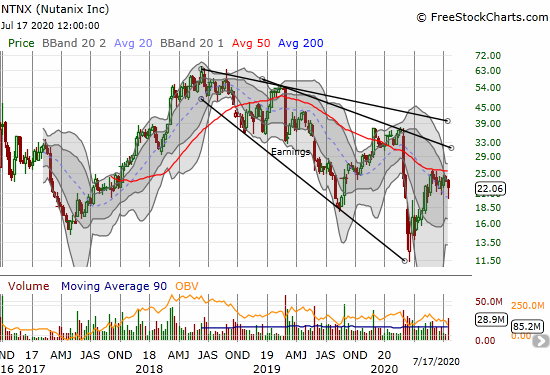 Nutanix (NTNX) is an IT infrastructure company that helps its customers “modernize their datacenters and run applications at any scale, on-prem and in the cloud.” The stock peaked in June, 2018 after a 13-month, 310% run-up from an all-time low. The March, 2020 stock market crash briefly took NTNX to a new all-time low. Even a 72% rebound from that all-time low leaves the stock in an overall downtrend from 2018 all-time high.

I was briefly interested in Nutanix as a trade after a 33% post-earnings decline on March 1, 2019. The post-earnings rebound transformed into a “dead cat” bounce, and I lost interest. Fast-forward to last Friday and takeover speculation in “The Information” brought Nutanix right back to my attention. The stock jumped 8.4% on the day although it faded from technical resistance at its converged 20 and 50-day moving averages (DMAs). Trading volume surge to almost 5 times its daily average.

As a fading stock – May’s confirmation of 200DMA resistance and this month’s confirmed 50DMA breakdown – with a multi-year downtrend, NTNX is a speculative stock. Numerous poor reactions to earnings reports, including an 8.4% pullback after the last earnings report on May 28th, suggest that the fundamental story in Nutanix is fading. A takeover could be the right medicine to turn the story around.

I went back to the May, 2020 earnings report on Q3 fiscal year (FY) 2020 earnings and the Seeking Alpha transcript of the earnings conference call to get a high-level understanding of the issues weighing on the stock.

The latest numbers are under-whelming even considering the COVID-19 related disruptions. Based on the 9-months ending April 30th, the year-over-year results are very poor.

Revenue growth with a worsening bottom-line and negative operating cash flow is a big red flag. Nutanix explained in the conference call that “the revenue growth rates are starting to reflect more meaningful comparisons as the revenue impacting hardware elimination has been effectively complete for the last six months.”

The shrinking balance sheet also caught my attention. One analyst during the conference call smartly asked about the potential for the company to raise money from the capital markets in the near future. Nutanix responded cryptically:

“I think if we were at some point to raise cash in the future, it would be more around tilted to giving us some optionality with our continued subscription transition. It would be more tilted to that rather than day-to-day stuff. And this would be more potentially around, do we want to have average terms shrink down a little bit further from where they are today, about 3.9.”

The non-answer may come from being unprepared to discuss such matters with a potential takeover around the corner.

I went back to the full-year 2019 results to find hooks of hope from pre-pandemic performance. The comparisons for year-over-year performance show more of the same from the last 9 months of results.

Nutanix explains its revenue and billings “compression” come from its ongoing transition to a subscription business model. Nutanix began the shift in the first half of fiscal year 2019.

The stock’s performance during this period of compression shows investors have not been willing to exercise patience. The company is working hard to reassure during this period. Nutanix even produced a video that appears to speak to customers and investors alike about how the subscription model benefits everyone. It is a wonder software companies ever implement different business models, eh?

Unfortunately the transition to the subscription model is not proceeding as well as hoped. The slow transition motivated Nutanix to drop guidance for Q4 (emphasis mine):

“…we are still in the early innings of transforming our business to a subscription model fueled by low cost renewables. While we’re making great progress on the transformation, we have not yet reached the point where the predictable renewal business makes up a substantial portion of our quarterly results. We are getting there, but for now, new business and up sell business, areas with greater inherent uncertainty still account for a vast majority of our quarterly billings. Accordingly, we do not believe it’s prudent to provide guidance for Q4.”

The company’s reference to “getting there” comes from 84% of billings in Q3 going to subscriptions. A 97% customer retention rate suggests that renewals should in due time become a significant portion of the business: “at this point we believe it’s largely a matter of time until the business matures to a new level of predictability.” Still, over 90% of Nutanix’s business comes from new and upsell business.

The conference call was full of talk from management giving nuggets of hope and encouragement against a backdrop of skeptical analysts. Nutanix even euphemistically described the pressures on terms and pricing for the subscription business as “investments” in the new business model.

Here is a summary of additional points that I found to be prominent:

Surely Nutanix has some of the raw ingredients that would make it attractive to an acquirer: 1) an extensive and global customer base with high loyalty, 2) compelling technology uses cases for the conventional and transforming digital economy, and 3) a relatively (and understandably) low valuation at just 3.0 sales, less than half what it was over a year ago (data from Yahoo Finance).

Speculators were eager to bet on a takeover in the coming week. An imminent takeover could better explain the company’s reluctance to guide for the fourth quarter. Nutanix has had a partnership with Hewlett Packard Enterprise (HPE) for almost 3 quarters. Could HPE be a suitor? Not likely since HPE has a market cap just 3x Nutanix’s.

Whoever the acquirer, if one exists, that company will be a risk-taker that has the skills to accelerate the Nutanix’s transition to a successful subscription model. That company will need to further invest in growth that will be hard to achieve in the middle of a global pandemic.

I am content to wait until the dust settles on the trade in the week. The longer the week goes without news of an acquisition, the better the entry I expect to get. So be it if I happen to miss a takeover this week. I will look to buy shares supplemented by more speculative call options dated at least in September to give a longer runway.

While very speculative, the upside to a NTNX takeover could be substantial: Presumably, NTNX would only sell at a minimum for the price it had just ahead of the pandemic and the company’s disastrous February earnings report. That price would still be a far cry from the all-time highs, but the relative “discount” would attract a suitor.