So what happens when these stocks start to break down along with so many others? Is their weakness suddenly a harbinger of good tidings? I doubt it. Liquidations are showing up all across the stock market like a movie in slow motion. This weak trading action makes me think and rethink when I generate posts about how to play the potential for oversold bounces in the stock market.

Let’s take a look at what the charts are telling us about Proctor and Gamble (PG) and Clorox (CLX). I am tossing Oracle (ORCL) in the mix because until it reported earnings Thursday night it was one of the better performing big cap tech stocks helping to keep the NASDAQ from slicing through 2011 lows (for more context on the ominous weakness in big cap tech see “A Rare and Important Test for Apple’s Recently Underperforming Stock.”) If giants like these fall decisively, they will help undermine market psychology.

Proctor & Gamble sliced through its 200DMA on increasing selling pressure.

PG has actually not made much progress since its nine-month rally off the Mach, 2009 lows (chart not shown). The stock is essentially now flat with where it was at the end of 2009. PG is now down 7.4% from its 2011 highs which are also 2 1/2 year highs. With a 3.3% dividend yield, I imagine the stock looks like a better and better bargain the further it falls. This could explain why $59 has served as a firm 18-month floor on the stock, even after numerous tests, especially in 2010. PG is at risk for a more sustained sell-off if this floor finally breaks.

Clorox (CLX) made fresh all-time highs in February, so the stock is presumably in pretty good shape even with the recent weakness. Nonetheless, if it is truly a safety stock in troubled times, then it should not experience any significant breakdowns. With a 3.6% dividend yield, CLX should at least fare better than PG. 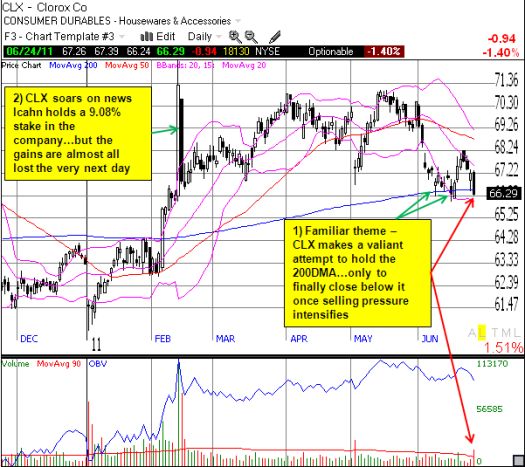 Note the interesting coincidence that the 200DMA support lines up with the “post-Icahn” lows where CLX surged on news that Icahn held a sizable stake in the company. Any further selling from here will signify a very negative shift in sentiment on the stock.

Oracle (ORCL) reported earnings Thursday night. Despite increasing guidance, the stock lost around 5% at one point in the after-hours session. Supposedly, a 6% drop in hardware sales are to blame given ORCL previously forecast a 6-12% gain. Whatever the reason, this tech giant is teetering on the support from its 200DMA. Moreover, ORCL confirmed a breakdown from a head and shoulders (H&S) pattern. While the H&S is a bearish pattern that I have seen provide so many false signals since March 2009, in this case, ORCL has actually confirmed the H&S breakdown. A further decline in ORCL from here all but confirms that big cap tech is in big trouble.

These three giants – Proctor and Gamble, Clorox, and Oracle – are just a few examples of favored names noticeably weakening. These giants must not fall if market sentiment is going to remain strong enough to turn back the sell-off anytime soon.