(This is an excerpt from an article I originally published on Seeking Alpha on February 15, 2012. Click here to read the entire piece.)

I hope my fellow solar enthusiasts enjoyed 2012’s solar run while it lasted. Solar stocks went on a tear to start the new year, but now the fun is done. Reality bit hard in the form of a bankruptcy filing from Energy Conversion Devices (ENER)…{snip}

The sympathetic selling in solar stocks was enough to knock First Solar (FSLR) off its uptrend from December’s multi-year lows. Another likely confirmation that the solar fun is done for now.

2012 indeed began in promising fashion. On January 12, Axiom’s Gordon Johnson, a noted solar bear, upgraded several solar stocks. It was like a “backhanded compliment” because in the same breath Johnson also predicted that by year-end solar stocks would hit new all-time lows. {snip}

As if to confirm Johnson’s short-covering thesis, renown hedge fund manager David Einhorn proclaimed just a few days later that his Greenlight fund closed out its short position in FSLR, calling it “…one of our most profitable shorts in the history of the Partnerships.”

The charts below demonstrate that shorts started covering positions as early as October and November. {snip} 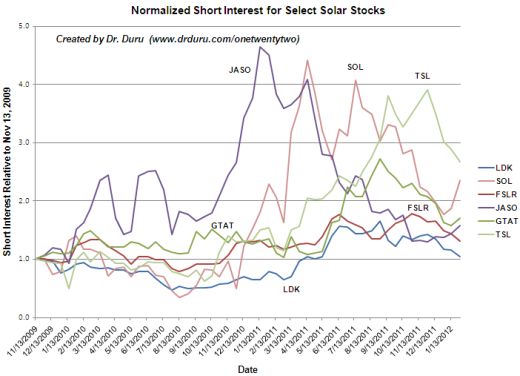 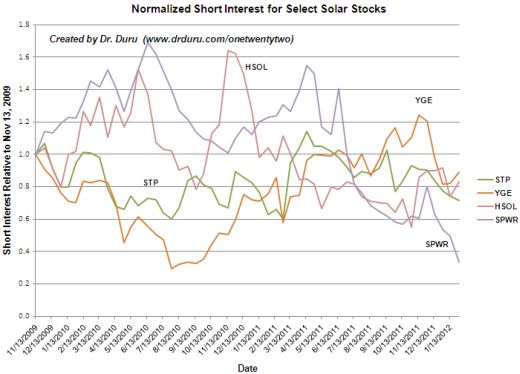 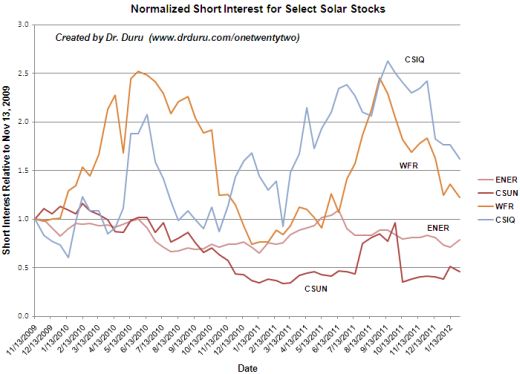 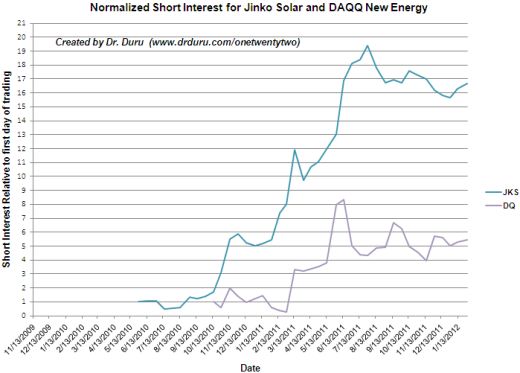 The main story for 2012 will be a continuation of margin pressure and increasing bankruptcies as some companies run out of cash before solar demand returns in sufficient volume. {snip}

In another corner of the ring is the tremendous drop in natural gas prices brought on by overwhelming supply. {snip}

First Solar’s technical advancements in thin film should help it remain one of the survivors. {snip}

In the meantime, I used the rally to significantly reduce my exposure and also take some profits where I had them. {snip}

(This is an excerpt from an article I originally published on Seeking Alpha on February 15, 2012. Click here to read the entire piece.)