Finally, Research In Motion (RIMM) is performing better than the general market. For the last two weeks, RIMM has trended upward relative to the QQQ (PowerShares QQQTrust for big-cap technology stocks). This has not happened all year. More importantly, the stock has finally jumped above the 50-day moving average (DMA). Granted, such a breakout has become a low hurdle because of the stock’s strong downtrend this year. But at least the stock has returned to prices last seen in the aftermath of June’s disastrous earnings announcement. 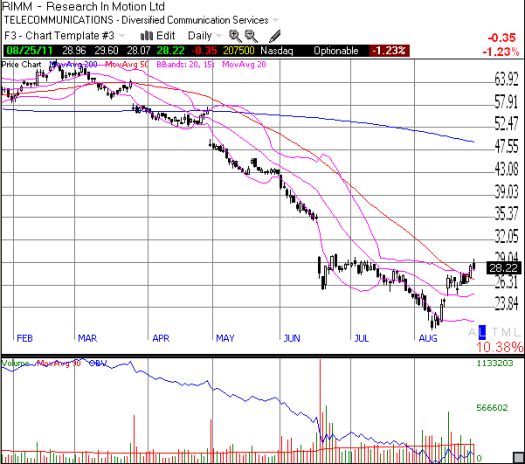 How has RIMM managed to change course for now? Certainly, there was a lot of excitement when Google (GOOG) announced its purchase of Motorola Mobility Holdings (MMI) on August 15. I can hardly translate this news into any realistic possibility for a buyout of RIMM. Much more likely, it provided a catalyst for a change in appreciation for RIMM’s extremely low valuation. I prefer to point back to RIMM’s repurchase program whose window opened in mid-July. I expected to observe a more pronounced signature of repurchase activity, but such buying seems like the most likely explanation for RIMM’s recent out-performance.

Now that the stock has erased its losses from the past month, another big test begins. If RIMM can achieve a CLOSE above $29, I think a fill of the post-earnings gap to $35 can happen relatively quickly. I have anticipated a gap fill since laying out a gameplan for playing RIMM’s buyback.