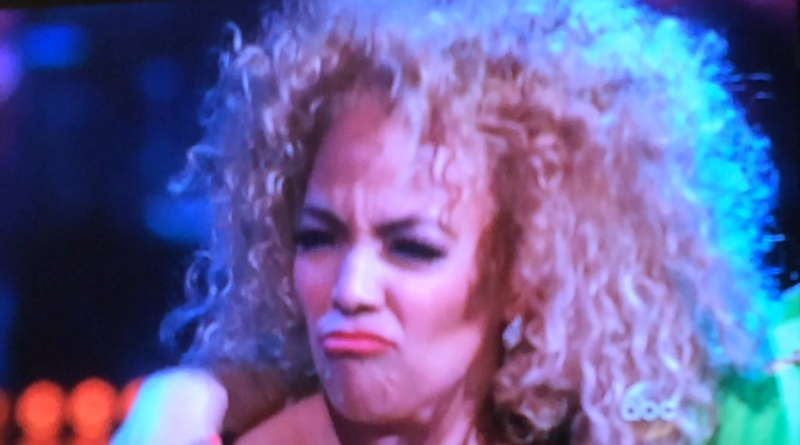 It is episode #2 for Season #22 of Dancing with the Stars. While waiting for the first elimination of the season, Kim Fields performed the Salsa with her partner Sasha Farber. As usual, Kim was fired up and really pushed all her energy into the performance. There were admittedly some rough spots. Most significantly, Kim had a bit of a tumble at the very end where she essentially fell to the dance floor in what was supposed to be a more graceful slide. But I am biased. So, I am giving Kim a solid 7 (you can give your own rating below) and looking forward to her doing a dance next week in honor of her days with the Facts Of Life. (Kim – PLEASE be careful on those roller skates!).

During the pre-dance preview, Kim talks about the amount of footwork and turns involved in the salsa. As is typically for these previews, DWTS shows Kim struggling to get these moves. Kim’s voice overlay laments her frustration with herself. Kim eventually breaks down and cries. Sasha of course comforts her (good man!). His voice overlay notes that Kim has been really hard on herself. She has been very emotional. He wants Kim to enjoy herself and this experience. He reassures Kim that when something is not right, he has to tell her. He implies that she should not take the feedback personally.

To pick up Kim’s spirits, Sasha surprises Kim with a video chat with the one and only Gloria Estefan!

Kim practically fell over in surprise. Estefan gave Kim words of encouragement. She expressed her enthusiasm for Kim doing the salsa to her song “Do the Conga.” This song is perfect for Kim given it was popular during her teenage years although Estefan barely does any dancing in the music video.

Naturally, after the chat, Kim transforms into the spunky spirit we know so well. Practices are more energetic and flowing and off she went into the spotlight!

For the dance, Kim strutted down center stage shaking her shoulders. After some arm waves, she beckoned Sasha to join her. His entrance was soooo very smooth as he slid into the frame on his knees. From there, Kim attacked the dance with flair and vitality. It is just too bad she ended on that stumble to the floor after doing a circle.

Judge Carrie Ann Inaba
Carrie Ann was quite generous in her judging for Kim fields in her salsa. She observed that Kim is a “natural performer.” She asked Kim to “do you” because when she does, she really lights up the stage with Tina Turner legs and Beyonce level energy. Woo hoo! Score: 7

Judge Len Goodman
Len was in a particularly cranky mood tonight, but he spared Kim from his harshest critique. Len noted Kim has great promise and potential for week two. He likes her dancing for the attack and the way Kim “goes for it.” He seemed to give Kim a pass for the mistake as he called Kim’s performance “otherwise fantastic and well done.” Score: 6

Judge Bruno Tonioli
Bruno immediately stood up to deliver his flourish that he calls feedback. He excitedly noted that Kim is clearly having fun which means we are all having fun! He added “You go for it! You shake those tushies like the best!” And then he cooled down just long enough to give some constructive feedback. First, Bruno acknowledged that dance is a new medium for Kim. Then he advised that next time Kim makes a mistake, just cover it up. Do not let the audience know you know you made a mistake. Just pick up your legs and go! Bruno concluded by saying Kim has so much to offer. Score: 6

It was interesting that the judges never referred to Sasha. This is an on-going feature of the appearances of Kim and Sasha. Kim commands such a presence on stage. Sasha is obviously quite content to sit back quietly and let Kim have her moments. Even in the post-dance interview, Sasha had to nearly drag the microphone to himself.

Give Kim your own rating here, but I sure hope you gave Kim every single vote you could! If not, MAKE SURE you do for the next round! I post the instructions below so NO excuses!

Instructions: select a score and click the rectangle directly below the poll (it may be grey, it may say “vote”). 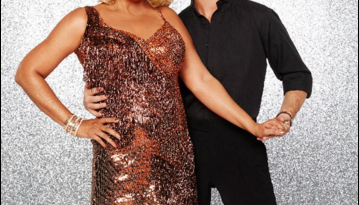 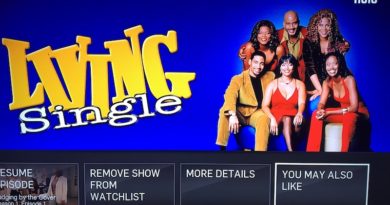